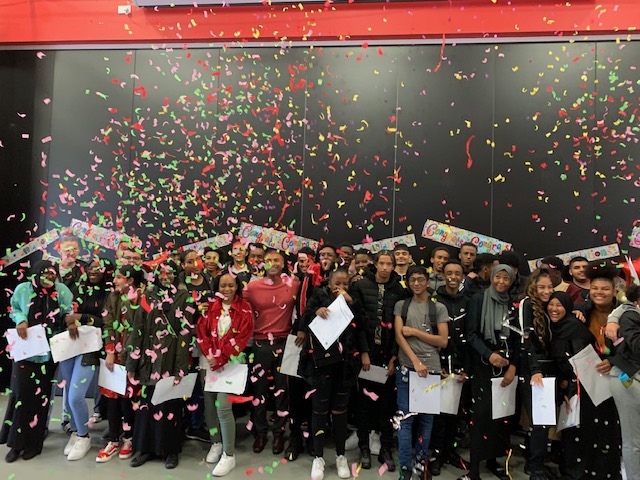 The academy’s achievements are all the more impressive given its location in Nechells, the 16th most deprived ward in the entire country and where unfortunately more than two thirds of children grow up in poverty.

Heartlands Academy has a Progress 8 score of 1.46 at key stage 4, meaning that students at the academy have achieved on average one and a half grades higher in every qualification than other similar students nationally.

Last year the academy achieved a Progress 8 score of 0.61, which was already significantly above the national average, and led to the academy receiving a national award for outstanding progress at the Schools, Students and Teachers (SSAT) Network Educational Outcomes Awards earlier this year.

The academy’s success is in line with achievement across the trust. In direct comparison to 2018, the number of E-ACT students across the trust achieving a standard pass (9-4) in both mathematics and English (either literature or language) has leapt up by six percentage points to 55% this year, the trust’s best-ever key stage 4 results.

“To be ranked one of the top six schools in the entire country for progress is testament to the hard work of all our staff and students. It makes me so proud to look around at the team at Heartlands and at the wider team within our trust, E-ACT. Every single one of our staff members is as passionate about those young people from Nechells as I am, and I couldn’t ask for more. Our academy is in Nechells, the 16th most deprived ward in the entire country, but we don’t use a child’s background as an excuse for underperformance. At E-ACT, we have very high expectations of all our students, no matter their background, and when you have those high expectations, students can and do achieve.” Fuzel Choudhury, Regional Education Director for the Midlands and previously headteacher of Heartlands Academy

“I would like to take this opportunity to congratulate all of our talented academy and regional staff, students and parents for this spectacular achievement. To be ranked one of the best secondary schools in the country out of almost 3,500 is truly extraordinary and reflects the hard work of everyone within our trust. I am delighted for the students in particular and the wider community that our academy serves. This achievement comes after years of hard work and determination from an exceptional team at the academy and colleagues within E-ACT. It is thanks to their dedication that Heartlands students can leave the academy fully prepared for the rigours of post 16 education and life beyond.” Jane Millward, Chief Executive

As we approach the end of half term week, our deepest thanks to those who have been busy in academy caring for chil… https://t.co/4MAnc6cmjL
Follow us