Welcome to the beautiful Birmingham Rep for E-ACT’s fourth annual National Pupil Celebration Event. You’ve made it to this page which means that you successfully scanned our event QR code for access to insider information on this year’s performers and award winners! 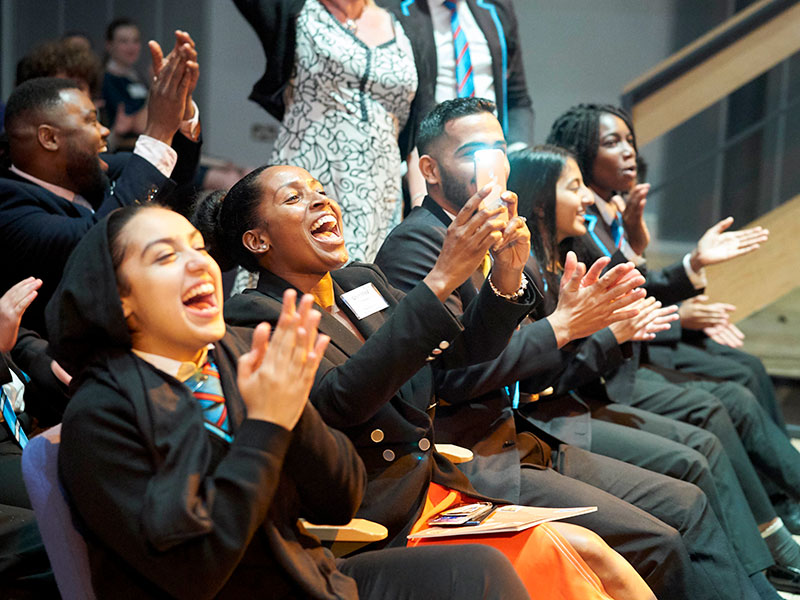 Selected from over 100 entries, our #Spotlight performers will be performing for you today, as well as being gifted a coveted #Spotlight trophy and Amazon vouchers just in time for the summer holidays.

Get ready for some serious drumming skills! Miguel and Akos have both been musical since they were small, with Miguel learning to play drums when he was just four and Akos picking up a guitar at  seven.

Paul, Alfie and Harry have been playing brass instruments together for the past four years. They have performed as part of a whole academy orchestra at numerous local events, and will be entertaining our audience with their rendition of Survivor’s ‘Eye of the Tiger’!

Maddie has an absolutely amazing voice, wowing the judges with her Kelly Clarkson cover. She’s chosen to perform a new song especially for the event: Rachel Platten’s ‘Fight Song’.

The Shenley Academy Senior Dance Group put together their performance piece as a tribute to those affected by the Grenfell Tower tragedy. According to their teacher, the dance students have really connected with their beautiful, moving dance.

With Korben rocking out on guitar and Layla’s amazing vocals, The Parker pair’s rendition of Eric Clapton’s ‘Layla’ was a hit with the Spotlight judges. We can’t wait to hear it live!

Year 4 worked with their class teacher to write a song for Mother’s Day to the tune of Ed Sheeran’s ‘Thinking Out Loud’. Listen out for the lovely lyrics when they perform at the Birmingham Rep.

Stephanie started singing at church at a very young age, and tells us: “I would go up on stage and sing my heart out without even having a microphone!” She is looking forward to performing ‘Never Enough’ from The Greatest Showman at this year’s event.

Over the last year, we have been on the hunt for the next J.K Rowling! E-ACT pupils across the country were asked to submit a piece of writing that they are proud of. The two winners of this award have beaten off stiff competition to be crowned our national winners.

This pupil’s fictional diary entry wowed the judges for its creative use of fantasy and tragedy whilst conveying the diarist’s emotions as the scene unfolds before him.

Earlier in the year, you were asked to submit any piece of artwork that you are particularly proud of – and the entries were fabulous! We were once again blown away by the beautiful artwork on display at our regional pupil celebration events.

This pupil’s depiction of a mountain scene wowed the judges, as did their use of colour and texture. The judges praised the scale of the landscape, with one judge commenting ‘you really feel like you’re there standing by that river as it flows towards the mountains’.

This students’ piece was praised by judges for its use of colour as well as the artist’s innovative use of layering. We were struck by this young artist’s creativity and their seemingly risk-free approach to art.

We’re again recognising the wonderful work of our staff through the E-ACT Staff Awards.

We’d like to thank everyone who nominated a colleague for an award this year. After much deliberation, our judging panel have whittled down the many of impressive nominations received to just six final winners.

According to colleagues, Ben is an inspirational member of staff. Despite difficult personal circumstances, Ben has shown great determination to do the best for his students, including taking on a GCSE PE group that needed a new teacher at the last minute. He leads by example, inspiring and motivating students to persevere. Ben made the students and staff of The Parker incredibly proud when he ran the London Marathon earlier this year in memory of his mum and dad.

In 2018, Djaoueb was asked to think big, taking on the project of moving all of our academies to the same fast, safe network (JANET). He was also tasked with bringing IT support in-house for our London and Kettering offices.

As a result of Djaoueb’s hard work, several of our academies have successfully moved to the new network. The trust has also made substantial savings on IT support, with those savings now free to be spent on our pupils. Djaoueb achieved all of this while maintaining the excellent support that he provides in his role as IT Lead for London & Bucks.

Do the Right Thing Award

Samima is an NQT maths teacher who has been completing her training at Heartlands E-ACT Academy. Samima has taught every maths session held on a Saturday, during holidays and after academy  since September. Samima has truly gone above and beyond to support her students in their learning, securing fantastic predicted results.

Michelle had dozens of nominations from colleagues in every category. One member of staff even dubbed Michelle a ‘safeguarding warrior’! Michelle has worked at Hareclive for the past 20 years and is a fountain of knowledge for parents needing support. She works tirelessly to ensure that children are attending academy and builds positive relationships with pupils and their families. She also coordinates camps for the academy’s most vulnerable children during her holidays.

Joe has been instrumental in transforming the way the trust delivers services, making savings that can be put back into education. This year, his region received the first-ever substantial audit rating for financial practice.

Joe is consistently a team player, regularly supporting the national team with external audits at the end of the year. This year, he has also supported the London & Bucks region with financial matters. According to Deputy Chief Executive Chris Wiseman, “the financial management he displays in the North region is an exemplar to others.”

According to colleagues, Wendy is the backbone of The Oldham Academy North. As well as carrying out her own full time cleaning role, she is always offering to help others. Wendy stepped in to assist the art department when they were without an art technician, helping students to get ready for their exam. She builds excellent relationships with students, helping with exam stress and updating staff on any changes in students’ eating patterns or behaviour. Wendy always goes above and beyond her job description to support the academy’s most vulnerable students.

We hope you’re having a great time! Be sure to Tweet us @EducationEACT using the hashtag #NPCE2019.

A News story by Ellena Schuster-Farrell

"I have fun when I am learning and I feel proud of my achievements everyday. My mum is proud of me too."… https://t.co/gFBvBOH7UZ
Follow us