Welcome to the stunning Birmingham Repertory Theatre for E-ACT’s fifth annual National Pupil Celebration Event. You’ve made it to this page which means that you successfully scanned our event QR code for access to insider information on this year’s performers and award winners! 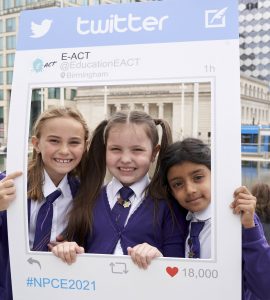 Selected from hundreds of entries, our E-ACT’s Got Talent performers will be showcasing their best performances today, as well as being awarded a trophy and vouchers just in time for the summer break.

Kylan was taught to play the piano by his uncle, as well as by practicing himself at home after his mother bought him his very own piano. He has been playing the piano for four years and will today be performing the song ‘Shape of You’ by Ed Sheeran.

Natalia has had a keen interest in singing and the arts for years. Having taken lead roles in academy musicals and concerts, Natalia has always been a key member of performing arts at The Parker Academy.
Natalia will be performing the song ‘I Dreamed a Dream’ from Les Miserables after using it as her audition piece for the musical theatre group she is part of. Being emotive and full of passion, the song was the perfect choice to show off Natalia’s talents as a young performer, as well as reflecting her own high aspirations and dreams.

Emily has chosen to sing ‘Riptide’ by Vance Joy today as she feels that it really suits her voice. She likes to play the guitar and sing at home and enjoys all types of music. After seeing her father play the guitar, it inspired Emily to start playing as well, and now she enjoys both singing and guitar playing.

Sagarika loves music and dancing and learned traditional Indian dancing called Kuchipudi and Bharatanatyam. She will be performing a special dance today, which took her two weeks to learn.

Tianna has been participating in gymnastics since the age of two and she is passionate about it as it makes her feel free and happy. She really enjoys practicing her routines on the gymnastic bar. Today Tianna will be performing a special gymnastics set.

Logan has always enjoyed watching magician’s tricks and was gifted his first magic kit one Christmas. After being inspired by magic tricks on TV, Logan started practicing his own magic tricks, whilst being taught by his uncles and stepfather. He loves to see people’s reactions when he performs these tricks and will be putting on a spectacular show for you today!

Clarissa aspires to be a musician and would love to compose her own songs in the future. She has chosen to perform ‘You know I’m no good’ by Amy Winehouse today as it suits her vocal range and her songs have a real depth about them.

Sadia’s debut performance at North Birmingham Academy was in 2020, winning their annual NBA’s Got Talent competition. She is a keen musician and singer amongst other many interests including language learning and video creation/editing.

Aaron has over the years shown a commitment and enjoyment of the piano and has been a regular performer in shows and competitions, inspiring peers and younger pupils alike. He is completely self-taught and highly motivated when playing challenging and beautiful music on the piano, and is constantly improving his technical and performance skills.

Earlier in the year, you we asked you to submit any piece of artwork produced in the last academic year that you are particularly proud of – and the entries were fabulous! We were once again blown away by the beautiful artwork submitted and today, four lucky winners will be collecting awards for their artwork.

Maria has always been a dedicated student of art and textiles, so much so that you always know she’ll be in the art faculty at lunchtimes. To call her gifted would be accurate, however this would unfairly ignore the years of hard work and practice she has put in to achieve the results she does.
Her winning artwork piece was inspired by the grand traditions of self-portraiture for practice and introspection and a love of mixed media working.

Madison really enjoys making things and whilst learning about ancient Egypt, instead of simply drawing an image of Tutankhamun, she went above and beyond and created 3D figures. These were painted blue and yellow and she even put jewels on them.

Ellie enjoys art as she finds it fun and a good way to keep creative. She is particularly fond of drawing, painting, sewing and modelling using polymer clay.

Sarah is a talented young artist who has been described by her teachers as having skills that outdate her years. She is extremely motivated with a bright future ahead of her.

Over the last year, we have been on the hunt for the next J.K Rowling! E-ACT pupils across the country were asked to submit a piece of writing that they are proud of. See below for more details on the four winners of 2021.

Writing is one of Scout’s favourite hobbies as she feels that she can really express herself freely when writing. She chose to submit her written piece for the competition due to her emotional connection with it.

Ever since she can remember, Christina has always enjoyed creative writing. She especially enjoys writing descriptively to enable the reader to form a picture in their mind and appeal to their senses. Her writing was inspired through English language lessons and independent exam preparation.

Imani’s inspiration for writing comes from her mother, who used to write stories and read them to her. Imani would love to get her work published one day and is writing a series of short stories.

It is a delight to read any of Eyad’s writing. His enthusiasm for the subject is obvious as soon as you look at his work, from his vocabulary choices to the effort he places on presentation. A future Times bestseller author – watch this space!

Amber’s stunning artwork wowed the judges and today you’ll be able to see samples of her art in person!

Charlotte’s beautiful voice was recognised by the judges and today you’ll hear her perform ‘She used to be mine’ by Sara Bareilles.

Sean Sherwood, Royton & Crompton E-ACT Academy
Sean was nominated by his colleagues for his dedication to inspiring pupils on what they can achieve with determination. He strives to make a difference in pupils’ lives and has also raised thousands of pounds for charities such as Cancer Research. Sean also recently appeared on the TV show SAS: Who Dares Wins and made it to the final. This move emphasizes his willingness to challenge himself to the extreme, whilst also inspiring others who have come from disadvantaged backgrounds to never give up.

Michelle Barton, Hareclive E-ACT Academy
Throughout the difficult period of lockdown during the height of the pandemic in 2020, Michelle worked tirelessly to ensure that the most vulnerable families had food hampers and emergency white goods. She continued to check in with the academy’s vulnerable families and actively sought extra support from local charities. Amongst her colleagues, Michelle is known as a real community hero for putting the needs of families first.

Do the Right Thing Award

Humayon Pramanik, National team
As the Director of Communications for E-ACT, Humayon’s work on managing the reputation of the E-ACT brand as well as all 28 academies during the various lockdowns over the past year has been commendable. Leading a communications team is always a challenging role, and even more heightened during a global pandemic! Through his calm and collected approach, Humayon was able to keep staff members assured that the reputation of E-ACT and its academies was in good hands, as he frequently liaised with the media, headteachers and ELT.

Crystal Burnett, DSLV Primary
Crystal was nominated by her colleagues for her outstanding work when onboarding new members of the team. Starting a new job is difficult at the best of times, but even more so during lockdown! Despite her busy schedule, Crystal was there for her team and went above and beyond to ensure the new members of staff felt supported. As a very experienced employee, she has shown dedication to her job and is a positive support for both staff and pupils

Waheeda Akhtar, Nechells E-ACT Academy
Waheeda has been described by colleagues as inspirational and an absolute asset to the team. She oozes tranquility and calmness whilst always remaining positive. This year, Waheeda has supported with translating to a parent who was in a crisis. Her calm and pleasant manner placed the parent in immediate comfort. Despite Waheeda having to shield during lockdowns in the last year, she continued to go above and beyond for pupils by assisting them with learning from home, supporting parents/carers to log on and translating to families when needed.

Likhon Muhammad, The Crest Academy
Likhon’s enthusiasm, commitment and passion to pupils’ learning has been commended. Likhon is always pushing for new ideas to provide the best learning and teaching for pupils. Not only did he join two E-ACT academies to jointly show team spirit, but he has recently joined The Crest Academy where he is relentlessly embedding the values of E-ACT. A true leader and team member at the same time!

Bernadette Mather, Blackley E-ACT Academy
Prior to lockdown, Bernadette had been working with local charities to raise money with Blackley Academy. She organised for each year group and the regional operations team to pick a charity and then raise money for it throughout the year, with healthy competition amongst the year groups. Bernadette did not let the pandemic stop her charity work and continued to find ways to raise money.
Through Bernadette’s hard work, Blackley Academy has already raised thousands of pounds with the aim of reaching £5,000 by the end of the academic year. She has worked with organisations such as Manchester City Council and Manchester United to source raffle prizes. Bernadette is a force of nature in the local community and has worked at Blackley Academy for over 30 years.

All staff, St Ursula’s E-ACT Primary Academy
St Ursula’s E-ACT Academy is being recognised as a lockdown hero, as during the height of the pandemic in 2020, more than a third of their pupils were still turning up at the academy. This was around 200 pupils per day, and teaching staff received a number of thank you messages from parents. The whole team at St Ursula’s worked tirelessly during this time and as the academy in the whole of E-ACT that had so many pupils taking part in face to face teaching, this certainly deserves an award.

Jennifer Clegg, Heartlands E-ACT Academy
Jenny has worked tirelessly to maintain the exceptional high standards at Heartlands. She was the headteacher when Heartlands was recognised as the Tes School of the Year in November 2020. Nothing is too much trouble for Jenny – her collaborative approach to E-ACT has resulted in other academies benefitting from the expertise at Heartlands and she will always support other academies. Jenny is a mentor for newly appointed headteachers and commits much of her time to supporting them. She is also chair of her ambassador group, is completely aligned to the trust’s values and always goes above and beyond to support E-ACT.

We hope you’re having a great time at the event! Be sure to tweet us @EducationEACT using the hashtag #NPCE2021.

A News story by Radhika Sharma

@ISC_schools Thank you for sharing! We look forward to welcoming you to the conference #EACTIdeas #EACTIdeasConference
Have you registered for our free one-day virtual conference on making mental health part of our everyday conversati… https://t.co/GXYtSIKQ0G
.@PerryCourtPri in Bristol has reopened this term with a brand-new building! This will add 50% capacity, making the… https://t.co/HNAo1Mrwms
Follow us