Welcome to the magnificent Birmingham Repertory Theatre for E-ACT’s sixth annual National Pupil Celebration Event. You’ve made it to this page which means that you successfully scanned our event QR code for access to insider information on this year’s performers and award winners! 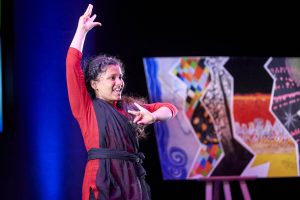 Selected from hundreds of entries, our E-ACT’s Got Talent performers will be showcasing their best performances today, as well as being awarded a trophy and vouchers just in time for the summer break.

Watch the uplifting cheerleading performance from students at E-ACT Blackley Academy as they showcase their talents.

Belle will be performing the song ‘On My Own’ from Les Miserables to transport the audience to the famous West End musical.

A fantastic performance from students at NBA as they perform a dance to the song ‘Prob;em’ from the musical ‘& Juliet’.

Watch Maia as she performs a classic tune on the keyboard – ‘Bagatelle’ by Ludwig van Beethoven.

Millie will be showcasing her excellent vocal skills as she performs ‘I’d Rather Be Me’ from Mean Girls.

For the first time ever, we have a performer at the event showcasing her sign language skills. Belle will be performing ‘Polly had a Dolly’ and ‘Twinkle Twinkle’.

Watch these amazing performers as they showcase their contemporary dance skills.

To end the show, Imogen will be performing ‘Part of me was You’.

The following students have their stunning artwork showcased around the Birmingham Rep Theatre today, as well as in your programme:

The following staff members will be showcasing their vocal skills and receiving awards for their talents:

For improving student engagement in the academy’s enrichment curriculum through the Bourne End Academy Society programme.

For his incredible efforts in running a successful school ski trip to the US.

For creating a positive staff culture at the academy and a ‘family feel’ for all staff members.

For being a fantastic acting headteacher since October and always supporting staff and pupils.

Do the Right Thing

For their tireless work to ensure that their academies receive a high level of support in relation to safeguarding.

For transforming the maths faculty in terms of results, supporting students and staff.

Kay celebrated 38 years of employment at the academy in April 2022 and has shown tremendous dedication to the school and trust.

For her magnificent work at the academy including charity work and organising events.

The following academies have been recognised this year for their fantastic Ofsted reviews:

Team of the Year

A very special award will be given to E-ACT The Oldham Academy North for their incredible efforts in getting the academy back up and running again after a disastrous flood in 2021.

A News story by Radhika Sharma

It might be school holidays but have you ever wondered what a headteacher’s day looks like? Read our news article w… https://t.co/v2LB4hrKtL
Congratulations to former @ParkwoodAcademy student Jordan Houlden who achieved Bronze for diving in his first Commo… https://t.co/BIYZEjbipR
So proud that @BlackleyAcademy was featured in @thetimes highlighting the amazing work to help families with the co… https://t.co/JYkbpfgNyh
Follow us